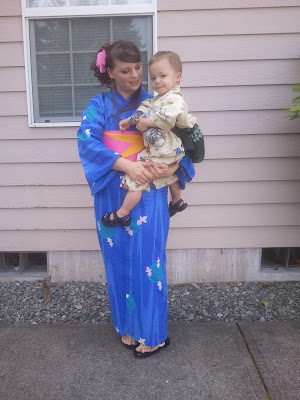 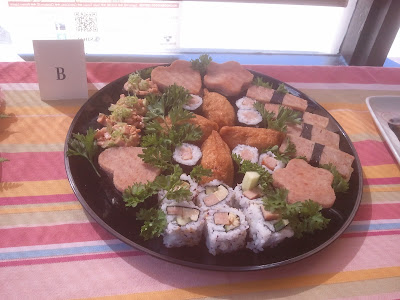 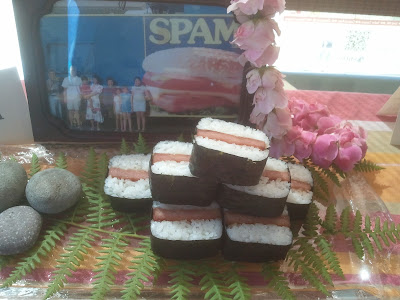 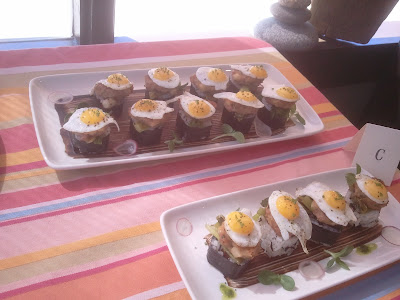 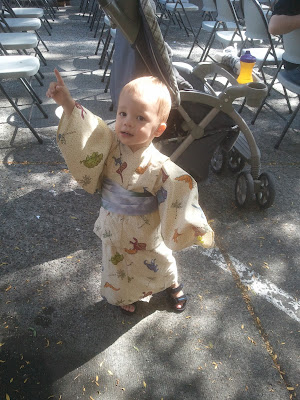 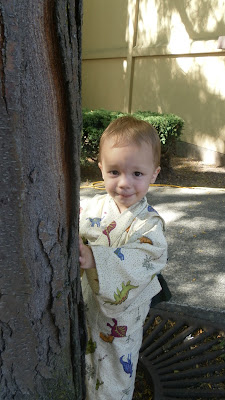 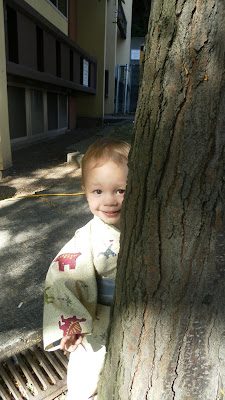 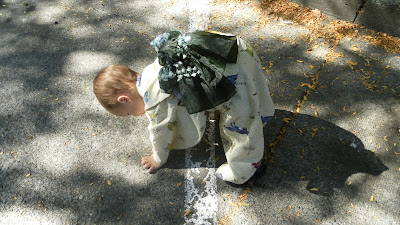 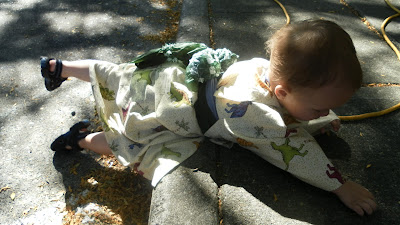 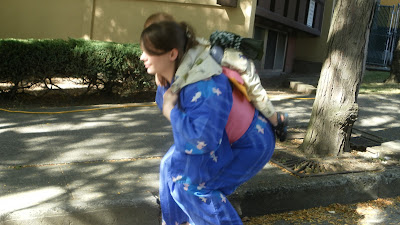 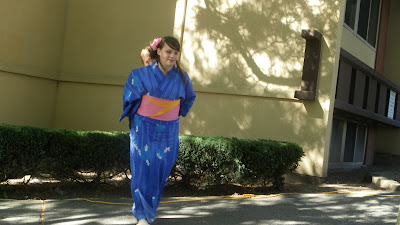 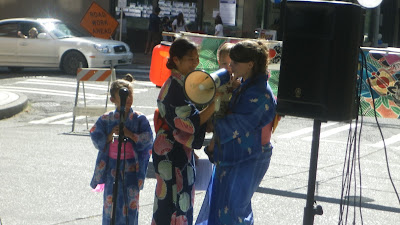 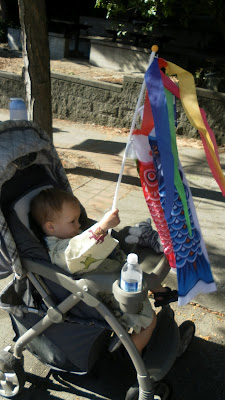 Bryan won best ensemble. He loves his prize, a koinobori toy!
Posted by Amanda at 2:58 PM No comments:

I apologize for the lack of posts lately. I've been rather busy!

Last month, my family went to one of our local Bon Odori festivals. My niece, Atlantis, came with us and we had a great time dancing in the festival. 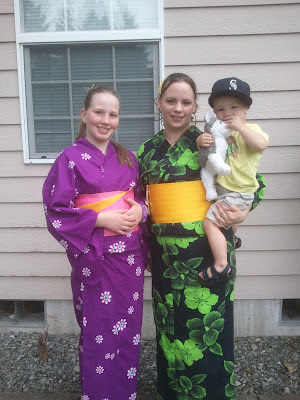 Bryan was in a bad mood right before going to the festival, so we had to put his yukata on later. 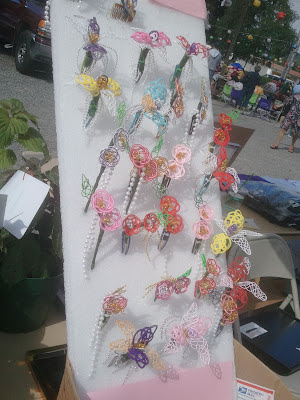 These beautiful mizuhiki kanzashi were for sale at the festival, I regret not buying one! 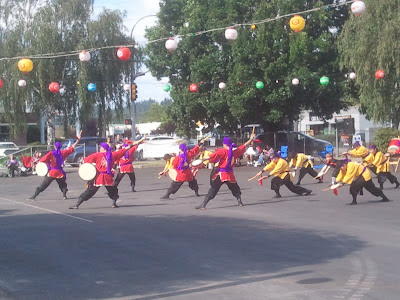 The festival was started by a performance by Okinawa Kenjin-Kai Taiko. My son loves them and has seen them perform twice this year. They invited everyone to come up and dance for the last song, but Bryan was too shy! 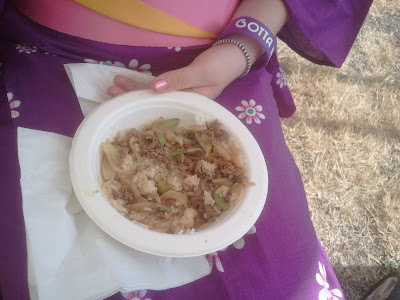 There was plenty of delicious food, including cold somen noodles, and Japanese style hot dogs. We had gyudon and shaken ice. The gyudon was delicious, and had celery in it which I hadn't seen before. I think next time I make gyudon I will add celery! 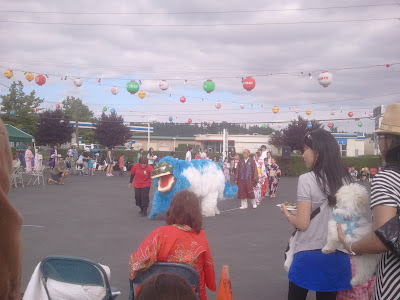 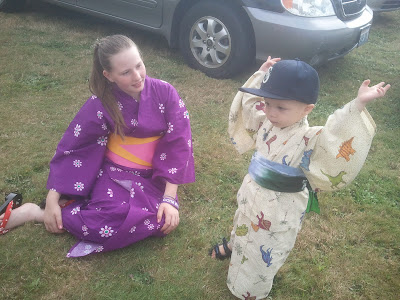 Bryan in his dinosaur yukata!! This yukata is very popular, many people ask about it! 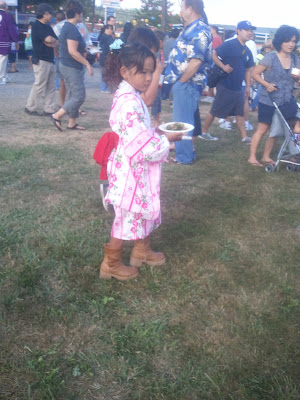 This girl was very cute, we loved her yukata + boots combination! 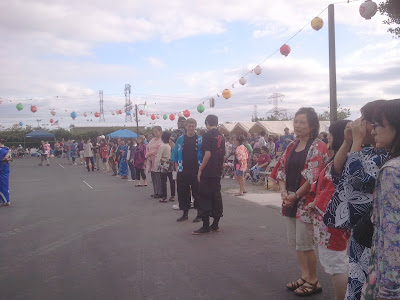 Everyone lining up to begin dancing. At first only a few people danced, but near the end of the festival, there were so many dancers that there were at least 4 dance circles and it was very crowded.

My husband tried to take some pictures of me dancing the first dance, Mikokoro, but most of the pictures turned out blurry (I need a better camera). 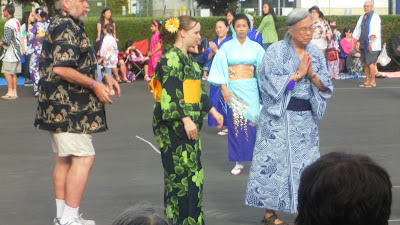 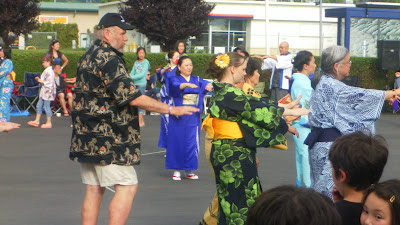 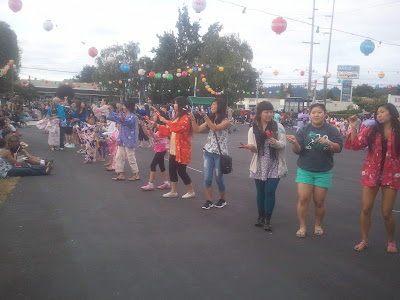 Festival dancers. I think this was the dance Isson Ippin. 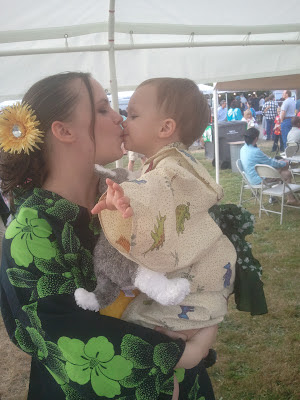 Aww, kisses! Even though he was grumpy before the festival, Bryan had a great time. The temple had a little playground, so Bryan and daddy spent most of the time playing on the slides.


I look forward to next year's Bon Odori!
Posted by Amanda at 2:16 PM No comments: