It is now Autumn, and my son is now three, which means I am beginning to prepare for his Shichi-go-san! It is something I've thought of for such a long time now, since he was born.

In Washington state, we are lucky to have one of the few official Japanese Shinto shrines in North America, Tsubaki Grand Shrine, 椿大神社. It is a stunning shrine located next to a creek and sacred waterfall (where they even do misogi shuho, even during winter!), and this beautiful location is also where my husband and I were married.

Shichi-go-san is November 15th, but usually observed on the nearest weekend. This year, we will go to Shichi-go-san Taisai at Tsubaki Grand Shrine on November 10th. The head priest performs a special ceremony, and the children receive an omamori luck amulet and chitose ame candy. Children and parents in the Seattle area seem very lucky to get to experience the happy memory of an authentic Shichi-go-san!

Since I am a lover of kimono, naturally my main thought is on what type of kimono is best! Nice kimono for a 3 year old boy is very difficult to find, and truthfully, money is very tight for us right now. I do love hakama sets for boys, and there are many that are smaller sized for 3 year old boys. However, tradition is that a boy first wears hakama at age 5 (hakamagi iwai), and girls first wear a stiff obi at age 7 (obioki), but that tradition isn't much observed any more. The tradition for 3 year olds is being allowed to grow their hair (kamioki). But those are old traditions, and I'm certainly not a person who follows traditions strictly. Nowadays parents choose what a child will wear, based on their own preferences, so they may have a memorable happy day.

Originally, hakama would have been my first choice, but now that Bryan is three, I am certain that hakama would be difficult and heavy for him to wear. I have heard of other families saying that their 3 year old had buckled from exhaustion after being dragged to the shrine and back home, or to the rental studios. In some areas of Japan it is common for a 3 year old boy to wear his noshime, omiyamairi kimono from when they were babies, paired with a hakama without haori, a jinbaori (example), or recently, a hifu coat. A suit or fine Western style clothes are also very common.

After much deliberating, my family has decided on doing a hifu type ensemble. After announcing this, I was met with some concern, as hifu coats are often thought of being girl's wear, I think there was concern that I would be dressing my son as a girl! It is a relatively new style, but hifu coats for boys have been around for several years now, and is gaining in popularity since at least 2008 (example, here).

In fact, when I first began window shopping for little boy's kimono ensembles, back when my son was born in 2010, hifu sets consisted of nearly half of the options for 3 year old boys on shopping sites, such as Rakuten, and the trend still remains. Before going into my own hifu ensemble plans, I'd like to share some examples, so hopefully no one will think I've gone crazy! 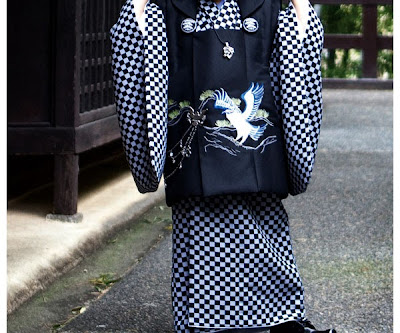 Many of these will be shared from Rakuten. This one advertises two sizes, 3-5 year old, and 5-7 year old. States "modern design", good for Shichi-go-san and New Years. 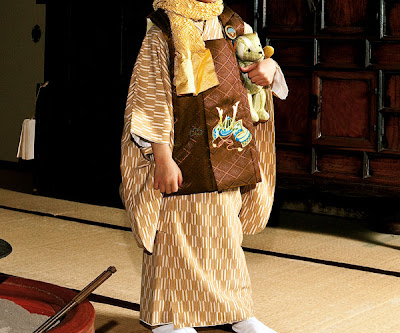 I am a fan of the kabuto design on this one. Another photograph of this one worn can be seen here. This one is very similar, but different design. 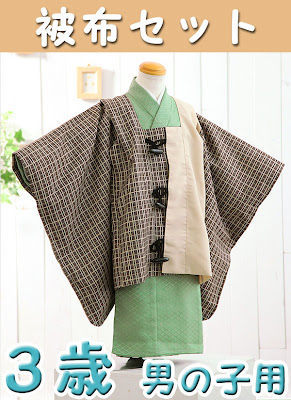 This one has sleeves and has an overcoat feeling with the toggle buttons. It has an informal feeling. Similar, this kimono seamstress has made a linen kimono & hifu set that also has a casual feel. 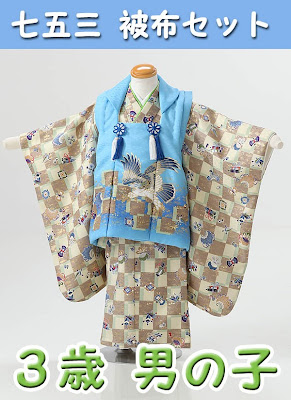 In general, boy's hifu sets tend to be more muted and boyish designed, but this one is more bold, yet still with boy designs reminiscent of vintage boy's kimono. You can see it worn by a cheerful boy, here. Another example of a hifu with a very bright vintage inspired pattern can be seen here, this one seems unique, it made me wonder if it was custom made!

This site has pictures of young boy's plain blue hifu coats worn with their noshime (omiyamairi) kimono for Shichi-go-san, since 2009.
As you can see, a hifu coat for a boy is not so uncommon! I do understand that we are accustomed to see hifu coats on girls, and that the style for boys is a relatively new thing. I too thought it was strange when I first learned about boy's hifu coats, but I've grown to like the look, as it makes me think of a comfortable young child rather than "girls only". I do have a friend who had chosen the hifu style for their son, and I am assured that hifu are in fact normal and acceptable for boys as well.

The way I see it, fashions change. Hakama used to be men's wear (aside from the aristocrat class), until the Meiji era when woman challenged that gender specific fashion after seeing the empress and her attendants wearing hakama under their uchikake kimono. Mantle coats (capes) used to be worn with kimono primarily by men, but these days it is a common winter kimono coat for women. When you think of these clothing items, adaptation towards gender neutrality for the sake of practicality and comfort is a positive step forward in fashion.

We made this decision based on several factors. My son's comfort being a big one. As much as Bryan enjoys putting on his yukata and playing in mommy's kimono stash, complicated and heavy items would make him lose his patience and he'd likely grow tired and impatient if his outfit needs to be "fussed" with. He might lose his patience and throw a tantrum. And the shrine is a long drive for us, I want him to be as comfortable as possible so that he can hopefully enjoy the trip up there.

Also a big factor, budget. Like I said before, money is very tight. If I could afford to buy even the cheapest secondhand boy's kimono, I would. There is a local Japanese antiques sale coming up in a couple of weeks, and if I did happen to find something I could use for $10, I would likely snatch it up, but anything more than that, I can not afford. So, I made the decision to MAKE his entire Shichi-go-san kimono set. I have material on hand, and I am crafty enough! But aside for financial reasons, I think the sentimental value of wanting to make my son's kimono is definitely my main factor. I am fairly crafty, but I do not have the material on hand to make a nice (non-flowery) hakama set at this time, so not only would a hifu set be the most comfortable, it is also the most practical.

That means I will be making a lined kimono, nagajuban (or hanjuban, I haven't decided), padded and embroidered hifu coat, tabi, and zouri. Please wish me luck! 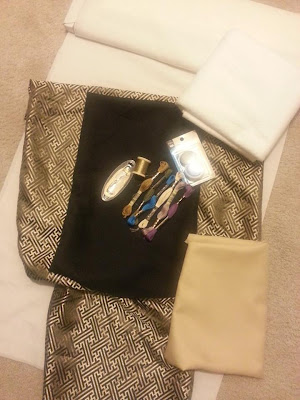 Here are my materials. Shiny olive sayagata fabric for the kimono, pale mustard crepe for the hakkake lining (ivory white bolt in the background is for doura lining), black crepe for the hifu, cotton padding, large buttons, embroidery floss and gold thread (even kinkoma!) for embroidery. I will probably embroider a kabuto by copying a design on a similar boy's hifu, I'm not feeling too creative at the moment to draw an original design. I am currently working on the zouri now, using shiny black pleather. I would like to update when I can to show how the ensemble progresses, please look forward to it!

Also, I would like to mention, since this is a rather large project, I will have to temporarily stop taking special requests in my Etsy shop until after I've finished. I apologize for the inconvenience, I will once again take requests after November. Thank you!