Yesterday, my son an I went to Aki Matsuri. Originally, I wasn't going to dress up in yukata, but I wanted to dress Bryan in his favorite dinosaur yukata, since he didn't get a chance to wear it this year. Then I had heard that kimono stylist Yu Ugawa of You & Yu Kimono Kitsuke Gakuin was going to be doing a kimono kitsuke demonstration, so I felt I had to at least attend that, and wear yukata. Since I've been on a roll making yukata and accessories (more on that later) I decided both Bryan and I would wear handmade yukata. I chose my vintage cotton katamigawari rose yukata.

The day before Aki Matsuri, I decided I would make a few small items from the leftover scraps of fabric from our yukatas. My rose yukata has a small matching purse, but I was going to be bringing a larger bamboo bag since I needed to carry juice and a spare diaper for my little guy. So, to continue my whole matching theme, I made a business card case and compact mirror using my leftover fabric. (I also made a koshihimo with the fabric, but didn't think to take a picture.) 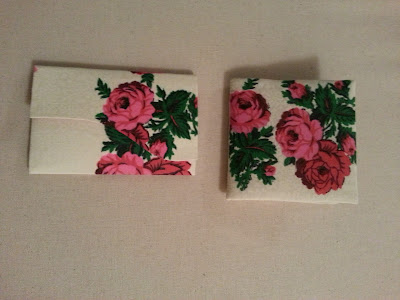 Both are fabric covered chipboard, the compact mirror has a layer of padding, to give an extra cushiony protection. 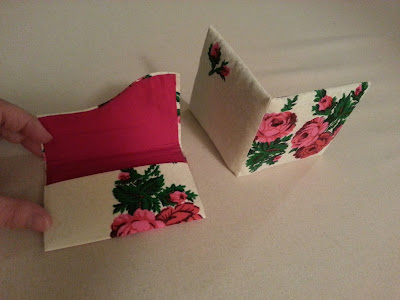 The card case closes with a small magnet, and has two pockets. I didn't get a picture of the inside of the mirror (oops) but it is also lined in red. I think the little rose bud on the back of the mirror looks cute!

For using up the leftover fabric from Bryan's yukata, I decided I'd make him a tiny kinchaku. At first I thought "what does a toddler need to carry in a kinchaku?" Toy dinosaurs, of course! 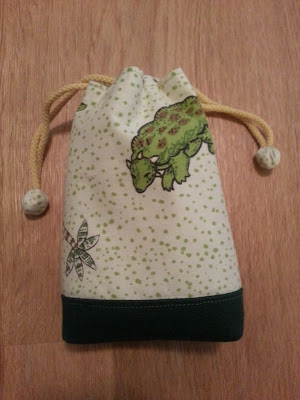 I used green canvas for the base. I also made the drawstrings short, so it is easy to carry without having to tie the strings.

On a completely non-kimono related note, I actually had lots of this dinosaur fabric leftover, and around the same time I made the yukata, I also made him a pair of pajamas, so this fabric has been used well! 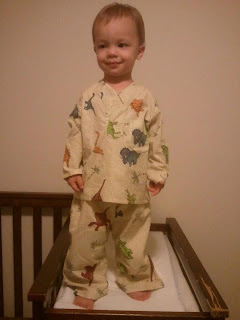 I didn't realize it until the day before that both of us would be wearing cream colored yukatas with green obi. Normally I try to avoid similar colors, but we did hear comments from festival goers like "you two are well matched!" so I suppose it is okay!

Bryan hadn't worn his dinosaur yukata in a year, so I had to adjust the sewn ohashori a bit. I tried it on him the day before to measure how much to let out, and when I took it back off Bryan gave me the most pitiful look! He thought he was going to be able to play dress-up, poor guy was so disappointed he had to wait until the next day!

Playing on my rose theme, I made a couple rose kami kazari (hair accessories), one of which went on my obi. I thought about wearing red lipstick, but reaffirmed that lipstick does not suit my at all! So I did a glamorous dark green shade eye makeup and red nail polish instead. (WARNING! Shameless selfy!)

As patient as Bryan is when getting him into his yukata, he just will not stand still for taking photographs. 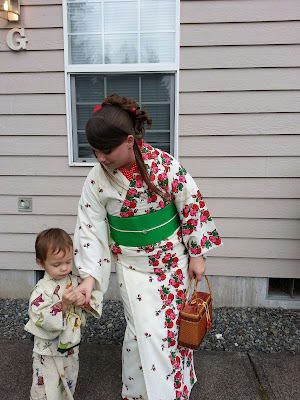 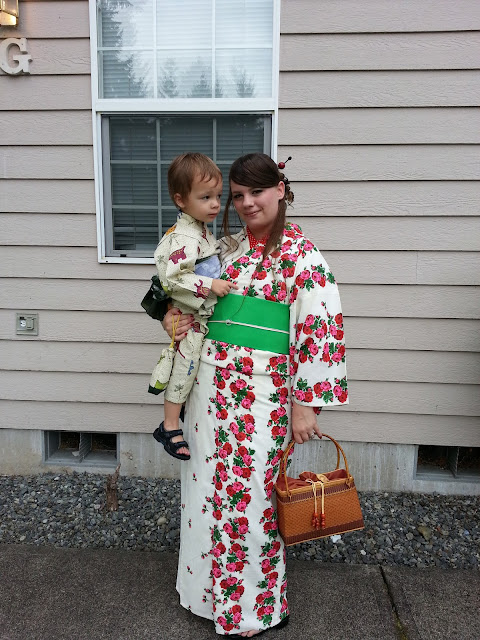 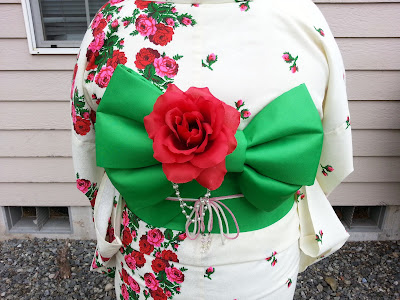 The tied kazari himo probably distracts too much from the pearls dangling from the rose.

After this, our day was full of ups and downs. We missed a dance performance by the Kabuki Academy because we got stuck in traffic, twice, the car had no AC, and when we got there the key was stuck in the ignition and wouldn't come out. We ended up needing to jump the car after only a couple of hours at the festival, even though the battery is brand new. Thank goodness for kind strangers! I'll have to remember to not use my husband's car for future long road trips, I swear I have a curse with electronic and mechanical things! Bryan is in his "terrible threes" (terrible twos is a myth!) so he threw a few tantrums. I had hoped that his kinchaku full of toy dinosaurs would keep him occupied so we could watch the kimono kitsuke demonstration, but he threw a tantrum before it started, and I wasn't going to torture the small room of people with an inconsolable screaming toddler, so we left. I did snap some pictures of the 2 kimono that were on display in the demonstration room. 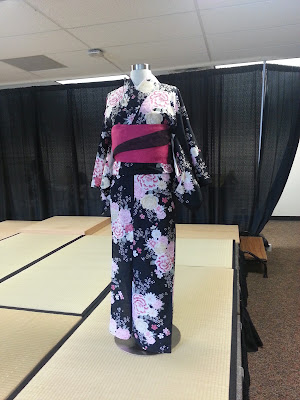 I did run into some familiar faces at the festival, people I know from my kimono group, and others that I have met at previous events. And lots of people dressed in beautiful kimono and yukata! I think Aki Matsuri is the most matsuri-feeling festival in my area.

We walked around a bit, but unfortunately didn't see the all of the exhibits. One of the main reasons we went to the festival was to meet up with my former zokei bonsai sensei to pick up a bonsai that I made many years ago. I had lent it to be shown at Aki Matsuri 7-8 years ago, but for too long I was too distracted or busy to get it back. I feel so bad that she kept it so long, she joked that she thought she'd have to sell it, haha! 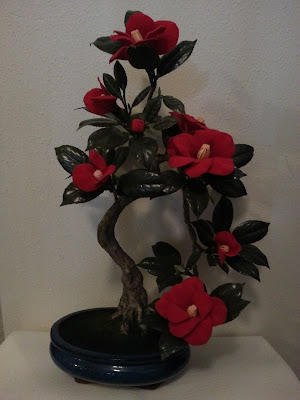 My reunited camellia zokei bonsai! Zokei bonsai is fake bonsai, made with wire, clay, and rice paper. The flower petals are formed with a special iron that looks similar to a soldering iron with interchangeable shaped tips. The flowers are sometimes made with a special type of silk ribbon, this camellia is made of thin velvet. Ah~ I'd love to make more zokei bonsai soon, but I have too many hobbies! 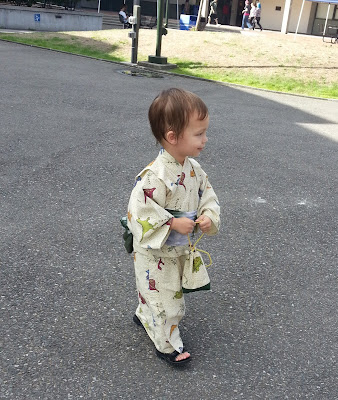 He loved carrying his kinchaku. He was people watching the whole time, interested in the crowds, but intimidated by those dressed in mascot costumes. 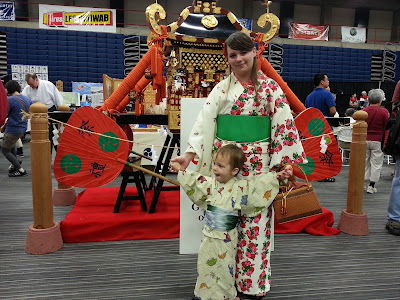 I ended up having to carry him much of the time, which caused me to become so disheveled and exhausted! Behind us is a mikoshi. A mikoshi procession is a big part of Aki Matsuri here. Unfortunately we missed it, but it is still beautiful to see it displayed.

There were many tempting things to buy at the festival, lots of kimono goods. Near the kimono kitsuke demonstration, they sold lots of brand new komon kimono and accessories, but I was a good girl and didn't spend money. Despite a few hiccups in our day, Aki Matsuri was still enjoyable, and I look forward to next year!
Posted by Amanda at 5:48 PM