Well, I call it a muslin test version, since most people use muslin to do a test run of garments, but I used an open weave poly-cotton I had laying around.

I had never sewn a hifu vest, nor do I own one to compare measurements against. So I decided to make a test garment to make sure my measurement estimates would work, based on my observations looking over photographs. It worked out, yay!

I figured that the hifu vest body panels would be the same or similar width as the children's kimono, with narrow extending panels (called machi) on the sides. Average length was of hifu on selling markets like Rakuten was ~49cm. I think I like a slightly longer hifu vest, so I might add 5cm length on the final version. Here's the roughly stitched test version: 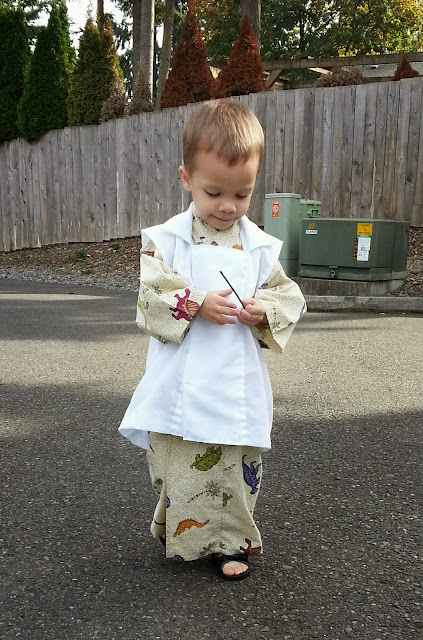 Yep, I think my measurement guesses were spot on! 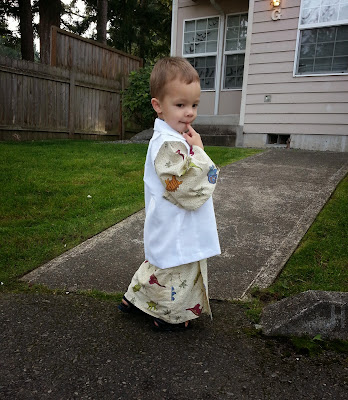 For some reason as I was stitching I thought that it may end up too big, even with the shoulder tucks, but I think it is the perfect size. 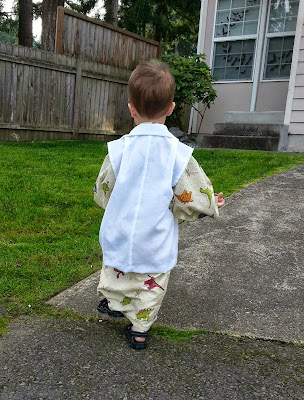 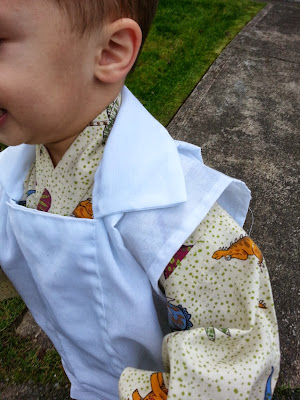 I've seen boy's hifu vests with both pointy and curved collars. I like the pointy squared end collar, it looks more boyish to me, plus it is super easy to do, just a rectangle! I think I will lower the front panels (tate-eri) a little bit to accommodate adding decorative buttons.

Last night I prepped my black poly crepe fabric to be embroidered. I was going to embroider a kabuto on the front, but as I worked, I discovered that the fabric warped and collapsed under the embroidery, despite keeping the fabric taught in the hoop and working the threads gently. Basically, it looked like crap. I'd never had such trouble with embroidery before!

So, I decided I will just do a plain black hifu vest. It will be plain, unfortunate, but that just means that it will be more versatile for informal events as well. And it will save me some time. I'm already getting to that last minute stressed point! 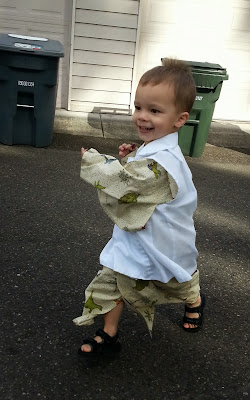 Toddlers are so difficult to photograph!! Even though this was just the test garment, I think he rather enjoyed it.
Also, I've heard the question asked a lot over IG forums and Facebook, whether or not kimono for babies and toddlers are restrictive - no, no they are not! You can see that my little boy isn't slowed down in the least, ha!

In Other News - I was going to post this on Flickr to share on the Immortal Geisha Forums, but discovered my account was being "recycled" due to inactivity (which is not true, but whatever) - I found these old geta recently on a thrift store treasure hunting day. I scored them for only 99 cents (it was colored tag day, originally marked $10). The brass fittings are rusty, so I wouldn't consider them in too good of condition, but I am intrigued by the brass fittings covering the back hanao ties. I've never seen that before, so I'm curious if others have seen similar back brass fittings. Anyways, it is a neat addition to my geta collection. 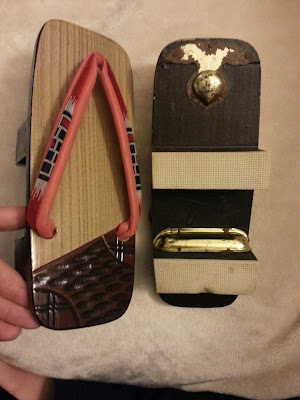