Yesterday, I attended a kimono fashion show with two ladies from our Seattle/Tacoma Kimono Club! We had a lot of fun seeing all the beautiful kimono ensembles. You can see all of the photos on our Facebook group page, or on the club's blog linked above, but here are some of my favorites: This is what I wore, the same polyester kimono I wore when Shannon and I went shopping. Once again, my obi is too low on my waist, but it isn't bad. 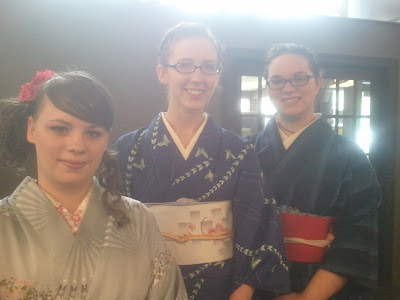 Group shot of us kimono club members. Me, Katie, and Shannon. I wish I could have gotten a full body picture, but there wasn't much space for picture taking in the seats. 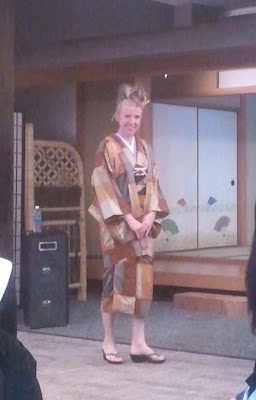 I apologize for the dark photo! Beautiful soft green houmongi. 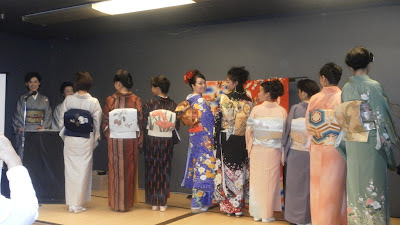 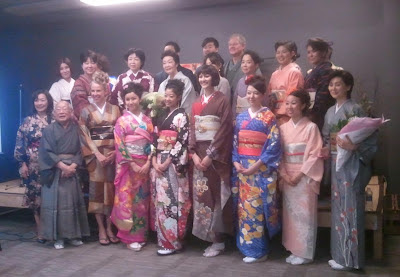 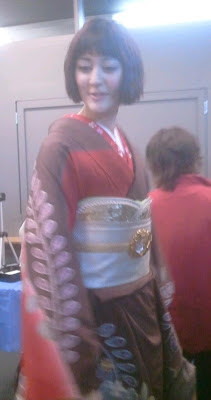 I loved the accessories with this model's brown furisode. She is wearing a silver hanhaba obi with a huge gold obidome, and a gold and pearl obi kazari that is shaped like an obiage. Her real obiage is completely hidden behind the obi kazari. 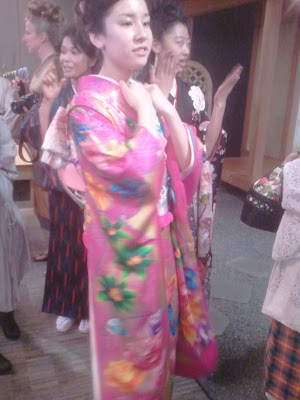 It was very hot and humid, these two models in fully lined furisode were suffering. The girl in pink pulled open her collar and showed me that she had cotton padding on her collar bones that was at least an inch thick, plus she had her regular clothes underneath.

Even though the three of us kimono club members were each wearing hitoe kimono, appropriate for the month of June, we were also very hot sitting inside. I had brought a fan with me, so we took turns using it. Except Shannon who was smart and skipped the nagajuban and used a kantan eri. One thing that I found interested that the kimono master, Yu Ugawa, said during the kimono presentation, was that nowadays it is acceptable to even wear lined kimono to events all year round, because most places have air conditioning. In fact, many of the audience members who wore kimono did wear awase kimono, including the wife of the Consul General of Japan. Interesting that a kimono master would point out that this kitsuke "rule" isn't as strictly adhered to anymore. Perhaps I won't feel so bad about wearing my lined furisode for my birthday in August!

During the question & answer session, someone asked Ugawa-sensei what the cut off age was for wearing furisode, and I felt giddy when her answer was the exact same as what I mentioned on the Immortal Geisha forums: she mentioned Japanese celebrity Tetsuko Kuroyanagi who still wears furisode at 80 years old! Even though I am almost 30 years old, I still want to wear furisode sometimes!


It was so much fun, I can't wait until the next kimono club outing! After the kimono show, there was a sign up sheet for information for an upcoming kitsuke class. The details haven't been set yet, but it seems it will be a two-day lesson taught by Yu Ugawa-sensei. If it is reasonably affordable, I would love to check it out!
Posted by Amanda at 9:51 PM