Here is the second children's book I have from the Hikari no Kuni, Koe no Ehon series. This one is the folk tale - Nezumi no Yomeiri. The mice are adorably drawn. For some reason, I am enchanted by the mother mouse in the drawings. The daughter mouse is very cute and I love her kimono, but the mother mouse seems to have a fun personality. Especially in the first picture that you see the mother mouse, she looks to be telling gossip to father mouse!
There is a song, I was not able to find any examples of the song on the internet. I don't know if this is a traditional song or if it is a song composed for this record book. I will, however include the romanized lyrics, for anyone who can read music and would like to sing along.
Click on the images to view them larger. 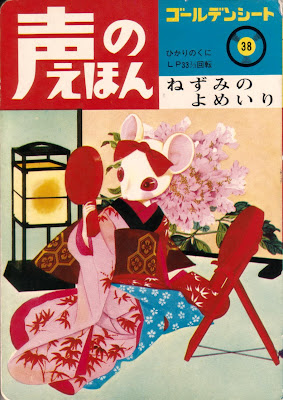 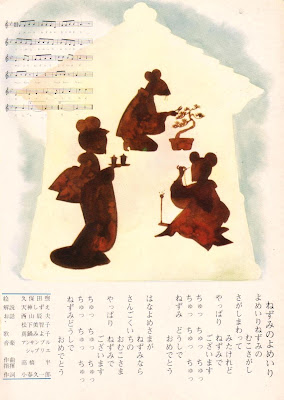 Here are the lyrics to the song. I will give the translation here, and the romaji lyrics below. 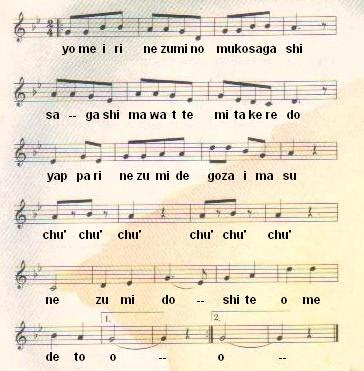 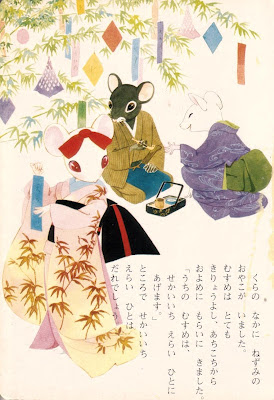 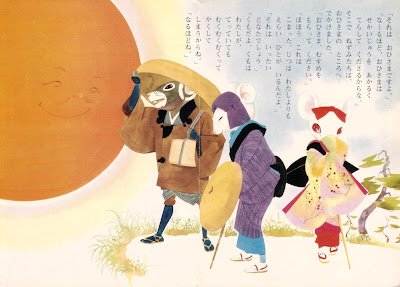 "It is Mr. Sun, of course."
"I see! Because it is Mr. Sun that lights up the entire world."
So then the mice went to Mr. Sun and said,
"Mr. Sun, will you please marry our daughter?"
"Hoho, I'm sorry. Actually, there is someone who is much greater than I am."
"And who could that be?"
"The Cloud. Even if I am shining bright, I can be completely covered up by the fluffy Cloud."
"I see." 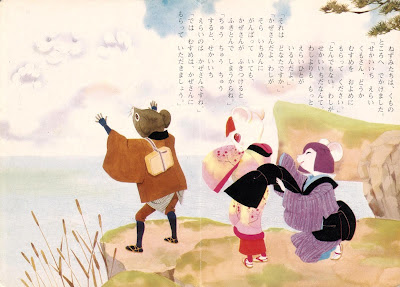 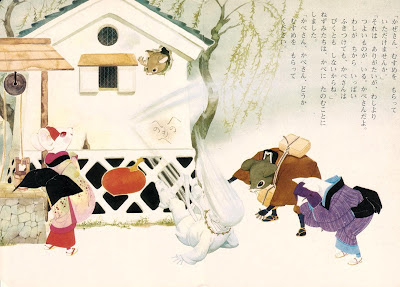 "Mr. Wind, will you accept my daughter?"
"I am grateful, but there is one who is stronger than me. Mr. Wall. Even if I blow with all my might, he won't budge at all."
The mice pleaded with the wall,
"Mr. Wall, Mr. Wall, Please accept our daughter." 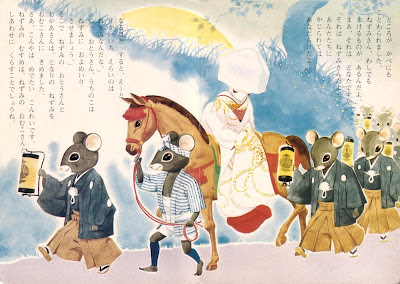 Nevertheless, the wall also refused.
"Mr. Mouse, there is something that can defeat me."
"Now, who could that be?"
"It is mice. When you chew on me I become full of holes."
"I see. Therefore, the greatest in the world are mice after all."
"Then, father, lets have our daughter marry a mouse."
Therefore, the mouse father and mother decided on the mouse that lived next door.
Come, tonight is a joyous wedding ceremony.
The mouse daughter and the mouse husband lived happily ever after. 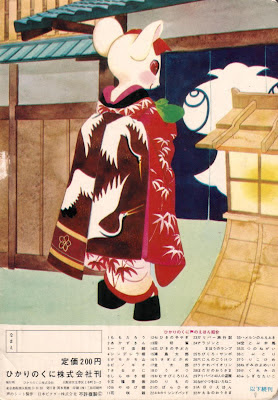 I find the image on the back of the book absolutely adorable. She looks like a little mouse maiko-san!

You can read the other children's book I have from this series here.
Posted by Amanda at 9:42 PM