The North American Post (Seattle Japanese-American newspaper) features two articles on the Kimono Jack and Celebrate Asia concert! The Japanese and English versions are different, so I've included both of them. My Japanese is rusty, and newspaper vocabulary is very new to me, so I did my best at translating. 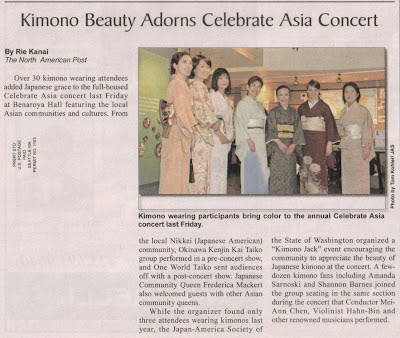 I included the link to flickr since blog images are too small to read, but here is the text:

While the organizer found only three attendees wearing kimonos last year, the Japan-America Society of the State of Washington organized a "Kimono Jack" event encouraging the community to appreciate the beauty of Japanese kimono at the concert. A few dozen kimono fans including Amanda Sarnoski (that would be me!) and Shannon Barnes joined the group seating in the same section during the concert that Conductor Mei-Ann Chen, Violinist Hahn-Bin and other renowned musicians performed. 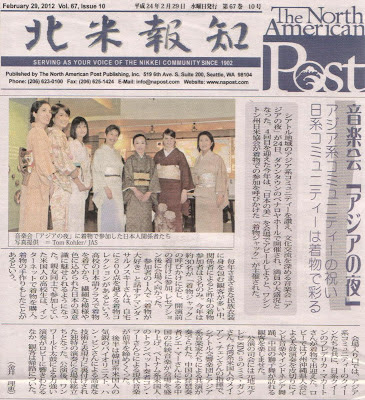 (Caption: Japanese staff that participated in kimono at the "Asian Night" concert) Note: I am not Japanese, nor part of the staff or committee.

The Celebrate Asia concert on the 24th at the Benaroya Hall in downtown Seattle, which featured the Seattle area's Asian community and culture, was a great success, drawing a packed house. In this 4th annual performance, The Japan America Society of Washington State called for a gathering of attendees to participate in a "Kimono Jack" reception to share the "beauty of Japan".

Every year there are many among the audience that wear various native dress, however last year there were only 3 participants who wore kimono. This year about 30 people answered the call for the "Kimono Jack", and had a reception for dressing adjustments before the start of the concert.

One participant I spoke to that loves kimono, Amanda Sarnoski, says that she has 200 kimono in her collection. Ever since she wore kimono the first time in her high school Japanese class, she became enchanted by the delicately patterned and colorful Japanese sense of beauty. Her companion, an American high school student, buys kimono on the internet, and has also made her own kimono.

At the reception, the Seattle Japanese Queen, Frederica Mackert, welcomed guests together with the Queens of the Asian community. In the lobby, musical performances entertained the audience, beginning with Washington State’s Okinawa Kenjin-Kai, followed by Indian music and Indonesian dance, and the Chinese Lion Dance.

The host for the concert was KING 5’s Mimi Jung. The Seattle Symphony played together with Asian musicians under the direction of Taiwanese-American Mei-Ann Chen. Jie Ma played wonderful traditional music on a Chinese pipa lute, and Vietnamese-American Cuong Vu group’s modern trumpet music concluded the first half of the concert.

The second half of the concert, the height of the show featured Korean-American violinist HAHN-BIN whose high-spirited skill and unique performance received a standing ovation. After the performance, the sounds of One World Taiko energetic performance echoed as the audience returned to the lobby.
Posted by Amanda at 11:19 AM