Alright, I didn't wear kimono on Halloween (gasp!), but my sister asked if she could borrow some of my stuff to dress as a "geisha girl" for her company's costume contest! My sister has no interest in kimono, so I was more than happy to help her!

My sister goes to work very early, so she had to learn to dress herself. I visited her the night before for a kitsuke lesson. She did very well and had fun. In the morning she left early and go dressed at work - outside! She was locked out until opening time, so she used the reflection in the warehouse windows to get dressed. She told me the truck drivers coming and going from the warehouse were staring at her strangely.

She did great dressing herself in kimono for the first time! 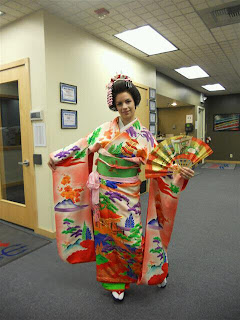 She of course won the costume contest, and her co-workers said they had never seen anytime so stunning.

I wore a Korean hanbok. I didn't feel comfortable going trick or treating in kimono while carrying a squirmy toddler. 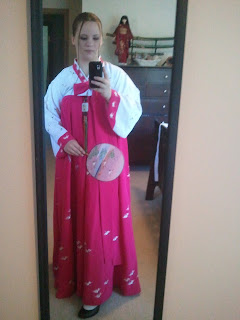 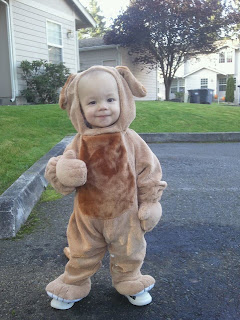