Most of my kimono items are things that I've "rescued" from my local thrift stores and antique stores. Usually they are not in the best shape, and normally they are way over priced, but occasionally I find things that are both affordable and useable. I love the hunt for kimono items in less likely places.

I figured I would share some of my finds that I decided to pass up. It is rare to come across kimono in local stores, so these kinds of posts will probably be far and few between. 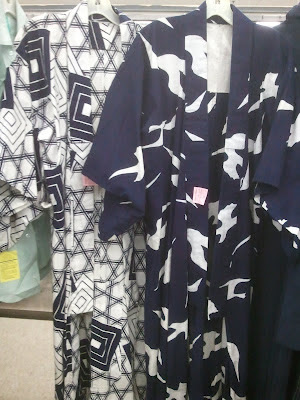 Here are two women's yukata I found at Bargain World thrift store. I don't remember the prices off the top of my head. The blue one fit nice but I could only get a small ohashori and no ohashori from the white one. I would have snatched these up, but the white one had some sweat stain discoloration and the fabric on the blue one looked old and worn out.

I found a nenneko at Vallue Village thrift store. I almost passed by it because I saw the small pattern and initially thought it was the stereotypical Chinese village pattern on many kimono-style bathrobes, but it isn't that pattern. 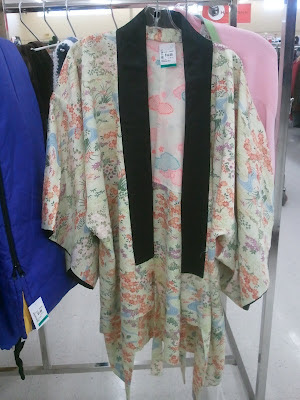 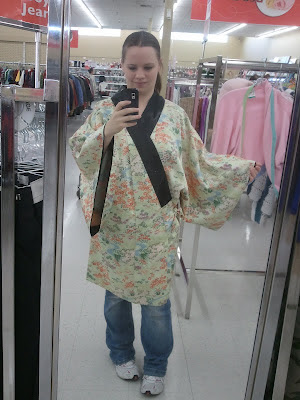 (mirror pic, I didn't flip the image so the collar just looks reversed). It was marked $15, and I may have considered it if it was on sale for something cheaper than that. But my son is almost 2, and I don't see a need for it, except to maybe try and convert it into a regular haori. I will say it was rather comfortable!

I was recently at an antique show and I found a few way over priced items. Two old dirty hanhaba obi someone was trying to sell for $150 each. I can tell they were in bad shape because they were badly cared for. And this obidome/obiage set had a price tag of $26,000!!! Its not that special. Sorry the picture is blurry, I was furious with the seller and trying to get away from him quickly after telling him it was highway robbery and good luck finding someone ignorant enough to buy it. 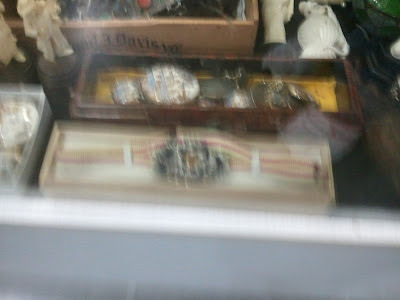 This isn't Japanese, but it fascinated me enough to share. I believe this is some sort of Chinese or other Asian embroidery. I found it today at Goodwill thrift store for $1.99. It look very old and it is falling apart and stained. It is sealed in plastic on a stiff board. I was surprised to see it tossed in a bin of random things. 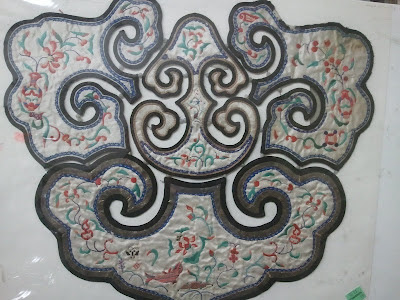 I was fascinated by one tiny little thing stitched into the bottom piece near the fish: 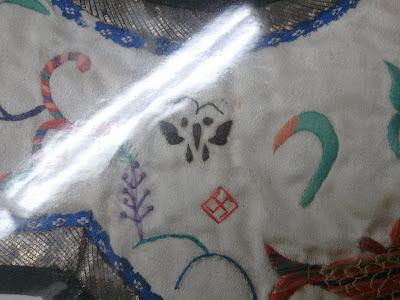 A tiny little swastika. I know the swastika is also symbolic of eternity in Asia and has ties to Buddhism, but the tiny size of it caught my attention.

I wish I could find the photo I took, but I was also going to show a strange find at an antique store. It was an African mask with a Chinese dragon painted on it. If I manage to dig find where I stashed that picture on my computer I'll be sure to share it. The interesting things you can find when you least expect it.

On a completely different note, my mother-in-law gave us some Japanese cookies. They were thin waffer shells filled with slivered almonds in a crunchy caramel. 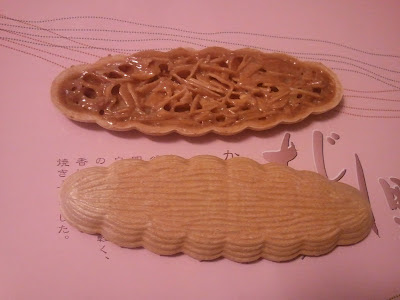 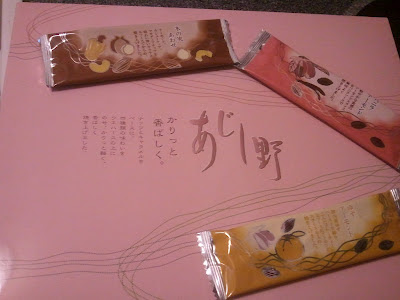 Three flavors, vanilla, mixed nuts, and yuzu citron. They were very light and delicious, but I think the thing I was more excited about was the fact that the box looks perfect to store some kimono accessories it! I have such a one-track mind... 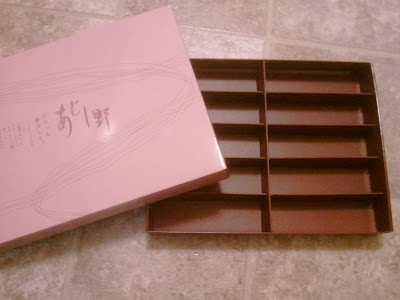