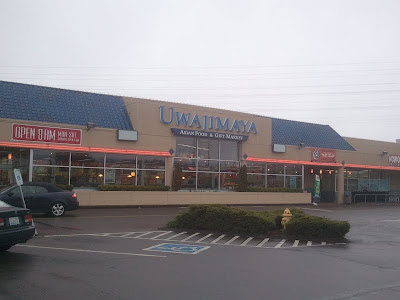 Today I went on a search for the local Japanese newspaper, The North American Post, because there may be an article in it about the Kimono de Jack. The reporter told me it would be out today. I drove to the closest Uwajimaya (50 min drive) only to discover the papers haven't been delivered yet today. Oh well, I did some shopping. My sister wanted me to get her some mochi.

I had heard that the Uwajimaya stores had set out their hina displays for the upcoming Hina Matsuri. I was actually looking forward to seeing it, but disappointed to see that it was covered in plastic wrap. 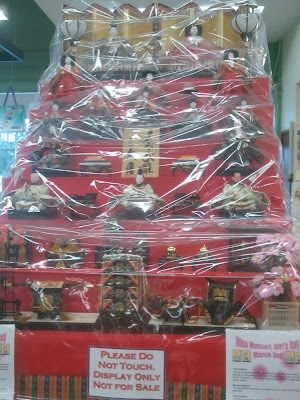 They had lovely chirimen wallets and zipper bags for sale, and I almost bought a sakura bell cell strap, but I was good. 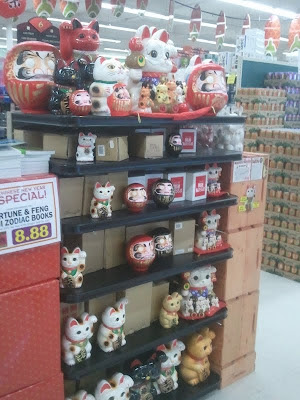 Maneki neko and daruma for sale. I have one of the big maneki neko with the smaller multi-color nekos attached. I had never seen a black daruma before so I had to look it up. I knew the different colors of maneki neko meant different things, and now I know it is similar with the daruma. The black daruma wards evil. I think I want a black daruma keychain to protect me from inconsiderate drivers. (source) 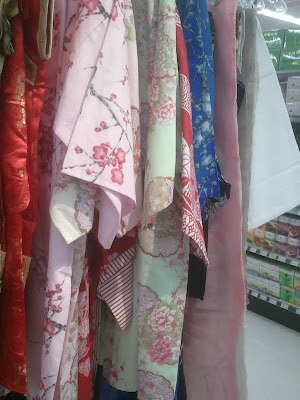 Uwajimaya sells "kimono", but they just sell tourist robes. The sales people will try and convince shoppers that they are the real deal in order to justify the excessively large price tags. The selection at the Renton Uwajimaya is small compared to the Seattle store. The Seattle store does however sell some authentic kimono accessories, like tabi and hadajuban, but they are not very affordable. I will admit that the sea foam green robe in this picture is lovely fabric and I wouldn't mind having a real yukata with that color!

The cashier gave my son a koi nobori! I don't know if it was a promotion they were having or not, but she said he needed one for kodomo no hi. 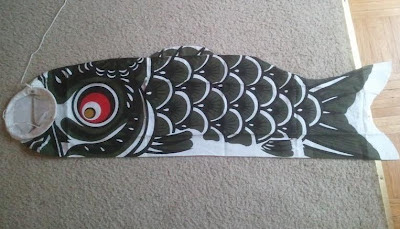 I don't know why, but it feels strange having just the one carp. Normally these are in sets? I read that the black one represents the father, the next smallest is red and represents mother, and then the smallest is blue representing the son (and then smaller ones in different colors for additional sons). I'm thinking about making the other koi nobori to complete the set. It is just cotton. Maybe I can paint the koi with fabric dye, but I've never painted fabric before. I don't even know if my landlord would allow me to fly the koi nobori outside. If all else fails I can just hang it in my son's room.

I later tried looking for the newspaper elsewhere at the Korean markets that are closer to where I live. They had another Japanese newspaper, but not this one. My husband's workplace is closer to Uwajimaya, he said he will try and get it tomorrow during his lunch break.

On a completely different note, I saw this heron today at my sister's house. Apparently it likes to sit above their fish pond. I wonder if he's snacked on some of their goldfish? I forgot that there were heron in the Seattle area, as I had never seen one in the suburbs. 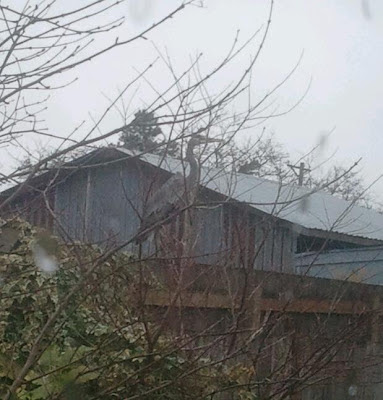 He was very shy and flew away when I moved away from the window. I hadn't seen one so up close before, it was windy and his long chest feathers were fluttering. I've seen one up close one other time at the Seattle Japanese Garden. It was struggling with eating a bull frog, it was very funny to see and a highlight of my visit there. Maybe some day I will wear a heron kimono to the Japanese Gardens in homage to that memory.
I like this one: 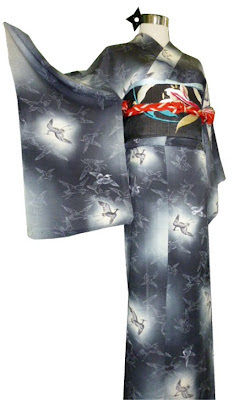 (source)
Most heron kimono have white herons, but this one looks like herons that we see in the Pacific Northwest (Great Blue Herons, I believe). But perhaps a koi ensemble would be more appropriate for the Seattle Japanese Gardens, since their giant koi fish are a main attraction.
Posted by Amanda at 8:53 PM